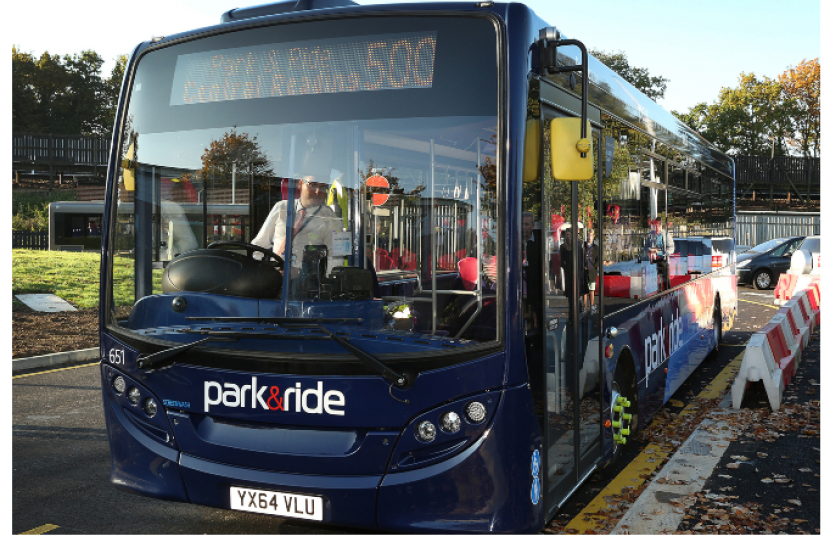 “Providing more options for sustainable transport options is crucial for Wokingham Borough Council to reach our carbon neutral target for 2030 and improve air quality in our town centres.

“We’re investing in infrastructure to get more people onto public transport which will help us become carbon neutral as quickly as we can.

"Our ambitious targets will also help make our town centres more enjoyable places to be by improving air quality, with fewer cars travelling into them,” says Cllr Gregor Murray, Ward Councillor for Norreys and executive member for climate emergency.

Plans to build a new park and ride on a key route into Wokingham have been approved. Work on Coppid Beech park and ride, next to the A329M and the boundary with Bracknell Forest, is set to start towards the end of this year.

The £3million project will mostly be paid for through the Government’s Local Growth Fund from the Thames Valley Berkshire Local Enterprise Partnership (LEP), which will provide £2.4million and the rest will be paid by the council. Once built the park and ride would help reduce congestion along the A329 into Wokingham, bringing journey times down and seeing fewer cars moving along the route. Air quality would also improve and carbon emissions reduce as part of the plans.

The land allocated for the application, which also includes cycle and motorcycle parking spaces and electric car charging points, was previously agreed for this use as part of the Keephatch Gardens development east of Wokingham town centre.

“Reducing congestion across the borough is one of our top priorities and improvements to public transport infrastructure, through projects such as Coppid Beech park and ride, will help make this a reality for residents,” said Cllr Pauline Jorgensen, executive member for highways and transport.

“The area links up extremely well with existing bus routes and will mean we can get people easily into Wokingham, or other nearby towns, on the bus. We expect journey times to drop along the A329 and other surrounding roads once this project is complete, as well as a host of environmental benefits.”

Construction begins at the end of 2020

Construction of the park and ride should be completed towards the end of 2021. The bus services linked to the park and ride would be predominately used for employment trips during weekdays, and leisure trips during weekends, into Wokingham and Bracknell town centres. It could link up with the existing 3/4/X4 Reading Buses routes from Reading to Bracknell, via Wokingham, and Courtney Buses route 151 between the two towns.

The council has outlined eight key action areas as it looks to reduce its carbon footprint following its climate emergency declaration last summer.

One of the eight key areas the council is working on is to reduce carbon dioxide emissions from transport, with better public transport infrastructure a key part of this.

Coppid Beech is one of three park and rides set to be built or expanded over the next few years as WBC invests in the infrastructure to help our borough become carbon neutral. Thames Valley Park park and ride is nearing completion while plans to expand Winnersh Triangle were recently approved.