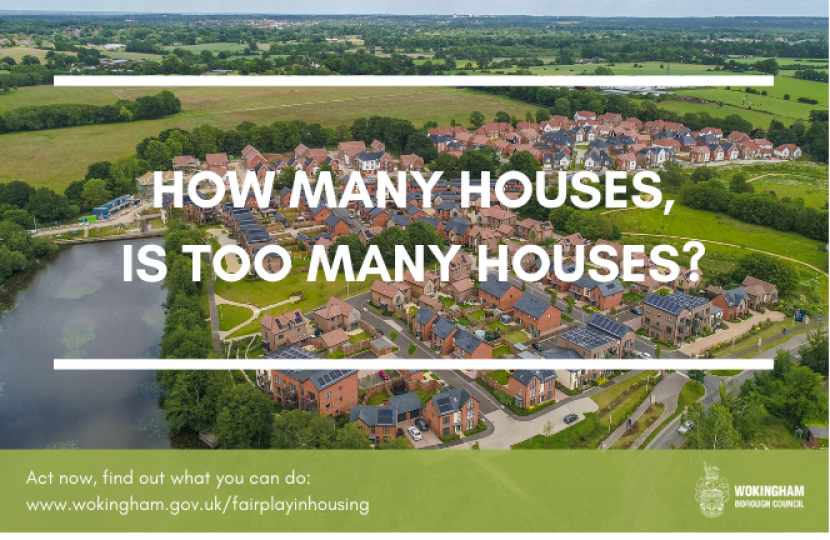 Imagine what Wokingham borough would be like if the Government’s proposal to double the number of homes built in our borough each year goes ahead.

We are extremely concerned about the impact of 1600 new homes every year would have on our borough’s infrastructure.

“If the Government go ahead with their proposal to double our housing numbers, our system of planning for new homes strategically just wouldn’t be able to cope,” said leader of the council, John Halsall. “We would be playing catch up with the infrastructure for years to come.

“Just imagine what would happen to our roads – the Reading Road would be at a standstill, the Finchampstead Road going out of Wokingham towards the Tesco’s would be backed up at all hours, junction 11 would be like a carpark and the A4 would be chock-a-block all day. If you think the roads are bad now, just image what would happen if we suddenly have to start building double the number of houses every year.

“We’ve had 10,000 new homes in the borough in the last 10 years,” added executive member for planning and enforcement Cllr Wayne Smith. “While that seems like a lot, in reality these houses were well planned and do have the infrastructure they need.

“We have seven new primary schools in the borough either already open, under construction or on the way, and a new secondary school open – the first in 50 years – at Bohunt in Arborfield. We have five major new roads, the Shinfield Eastern Relief Road already open, the Arborfield Cross Relief Road opening in October, the North Wokingham Distributor and Winnersh Relief Roads mostly open and nearing completion and the South Wokingham Distributor Road coming in the next couple of years.

“We are investing £170million in new public open space, play areas and parks and £45million in new sports facilities. We have five new community centres coming and £420million worth of affordable housing. How anyone can say we aren’t building the infrastructure is just beyond me. But, that is all about how we have been building in the past, based on our last local plan, which gave us a roadmap of how to develop the borough responsibly, planning new communities in four strategic locations across the borough all with the infrastructure to support them."

Wokingham Borough Council is urging residents to respond to the Government’s proposal that would see the number of houses built each year in Wokingham Borough more than double. The consultation, which closes 1 October, on the Government’s proposal would see over 1600 new homes a year imposed on Wokingham Borough. This is more than double the current figure. See the parliamentary petition by visiting https://petition.parliament.uk/petitions/548391 or visiting the parliamentary petitions webpage and searching for ‘housing target’.

Leader of the council John Halsall said: “What the government is proposing is absolutely outrageous – we have been playing according to the rules for years, building thousands of new homes in Wokingham Borough. We’ve had 10,000 new homes in the borough in the last 10 years and now the government want us to more than double that – they want us to build 25,000 new homes in the next 15 years. That would be like building two new towns the size of Wokingham every 15 years!

“I have spoken directly to the secretary of state for housing Robert Jenrick about the disastrous impact this would have on Wokingham. To get him to really listen to us, we need our residents to contact their MP and Robert Jenrick himself, before 1 October when the consultation ends.”

To respond to the consultation:

For more information visit the council’s website at www.wokingham.gov.uk/fairplayinhousing