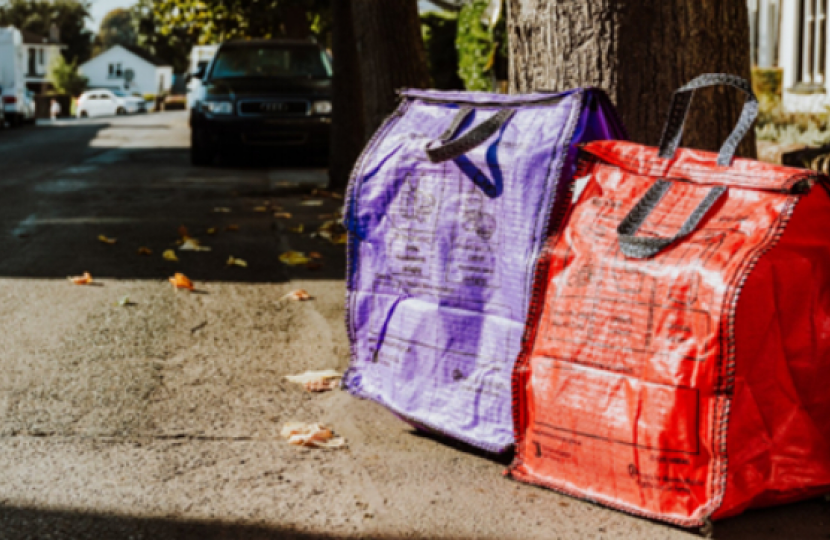 Proposals to replace the existing black recycling boxes with waterproof recycling bags in Wokingham Borough will be considered at a special meeting of the council’s Executive committee on 11 September.

Cllr Parry Batth, executive member for environment, said: “We’ve been working on a solution to the wet paper and card problem since the issue first emerged at the end of last year. We hired independent consultants to look at all the options available to us to ensure we made the right decision for our residents. We know how important recycling is to them.

“We are an ambitious council – we want to get to a 70% recycling rate by 2030, something no other council in the country has done yet. Solving the wet paper problem is an important piece of that puzzle. We can’t reach our target without first getting over this hurdle.

“The proposed change has the benefit of solving the wet paper problem and having a minimal impact on our residents, allowing them to keep the great recycling and waste collection services they expect. Now is the time for the council’s executive to look clearly at the issue and make a decision on it. Originally we were going to discuss this at the 24 September Executive, but we’ve brought it forward due to the urgency of the wet paper problem.”

The council’s executive committee will assess the proposal to replace the black boxes currently used as part of weekly waste collections with the sealable, weighted bags to address the council’s wet paper and card problem.

Changes in the world market for recycled material have meant that wet paper and card is no longer being accepted by recycling plants – which is hurting the borough’s recycling rates and causing significant environmental and financial cost.

The switch to waterproof recycling bags would help the council maximise its recycling rate, with an aim for a 70 per cent recycling rate as part of a drive to make Wokingham a carbon neutral borough by 2030.

There would be no other changes for residents, with weekly collections alongside blue bag and food waste recycling continuing.

In July, the council’s executive agreed to set aside funding for the purchase of the waterproof recycling bags.

The decision was called in to be reviewed by the council’s overview and scrutiny committee who upheld the decision at their meeting on 27 August.

The executive will be presented with how these could create a £400,000 cost saving in a full year, potential timelines for rollout and agree the costs, if the proposals are agreed.

The waterproof recycling bags, if implemented, would allow an increased capacity for every household by 20 litres per week and the council anticipates this would lead to an increase in total amount recycled in the borough by more than 1,000 tonnes.

For more information, including an FAQs on the proposed waterproof recycling bags, please see the online executive report.