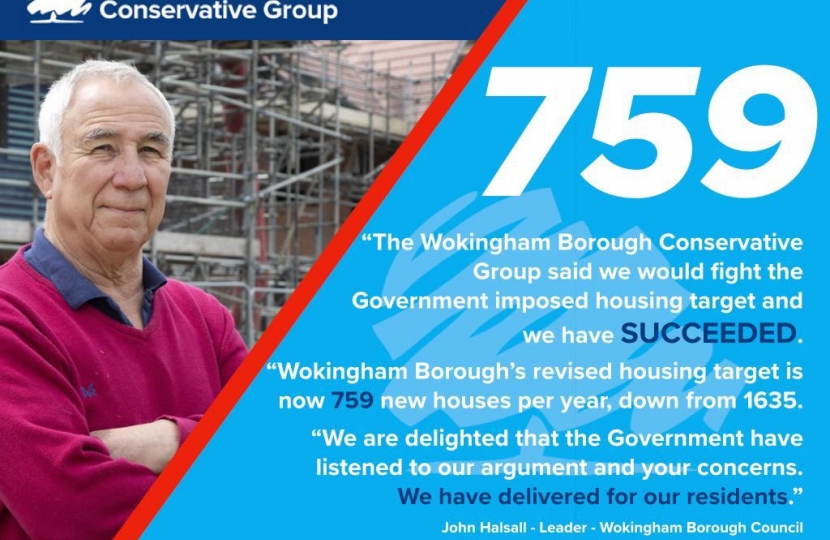 We welcome the news that controversial planning reforms which would have seen the government calculated housing need for Wokingham borough more than double have now been revised.

Earlier this year council leader John Halsall led a cross-party campaign against the proposals, asking residents to join the council in its fight against the reforms that would see the housing need for the borough double from 789 to 1635 homes per year. Wokingham borough MPs John Redwood, Theresa May and James Sunderland supported us in strongly opposing the proposals.

Happily, on Wednesday (16 December) the Secretary of State for Housing and local Government, Robert Jenrick, announced that the government would not follow through with the proposals contained in the consultation, but instead continue the current approach with an additional focus on house building in London and 19 other cities and towns in England.

This is great news for Wokingham borough. We fought this long and hard, and finally the government saw sense and changed tack.

Thank you to all borough residents, Councillors and our dedicated MPs who joined us in this fight to preserve what we all love about Wokingham borough.

We stood to lose so much had the government gone ahead with the proposals and doubled the number of houses we needed to build every year in the borough from 789 to 1635. This is even more important now than it was before, now that it appears we may not be able to build a new garden town at Grazeley.

Although the number is still too high, the proposed increase has been removed. So now we go back and look at all our options and go back to our residents when we come up with a plan B.