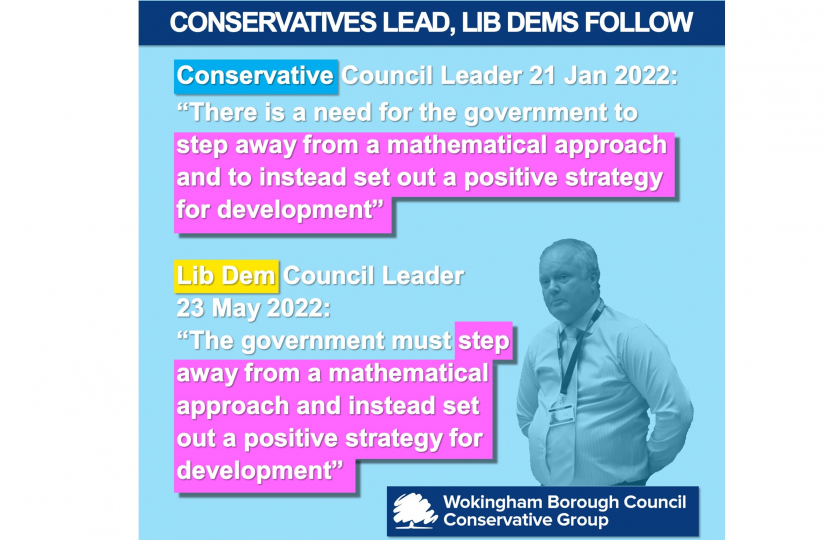 Wokingham Borough Council’s Conservative Group has described the new Council Leader as “out of ideas” after highlighting that his letter to Michael Gove regarding the Borough’s housing numbers is mostly a copy of his Conservative predecessor.

The letter, sent by Leader of the Liberal Democrat-led coalition Cllr Clive Jones, uses identical or similar wording throughout to the one issued by Conservative councillor John Halsall in January 2022.

This comes despite Cllr Jones rubbishing the approach which saw the Conservatives successfully cut the Government’s housing target for Wokingham Borough in half. Cllr Pauline Jorgensen, Leader of the Opposition and the Conservative Group, pointed to long passages in Cllr Jones’ letter which made identical points to the letter from Cllr Halsall.

For example, in setting out the problems with the planning system, Cllr Halsall wrote in January: “National planning policy has lost sight of any positive plan for how development should be managed on a national scale, favouring simple mathematical formulae. These formulae are applied without any sense check or any consideration of constraints or opportunities.”

In Cllr Jones’ letter, he writes: “National planning policy has lost sight of any positive plan for how development should be managed on a national scale. In the case of housing, housing need is calculated through a simple mathematical formulae [sic]. These formulae are applied without any sense check or any consideration of constraints or opportunities.”

Similarly, Cllr Halsall proposed the following solution: “There is a need for the government to step away from a mathematical approach and to instead set out a positive strategy for development, one which purposely aligns housing with economic aspirations such as levelling up and is fair and achievable for all places.”

Cllr Jones writes: “The government must step away from a mathematical approach and instead set out a positive strategy for development, one which purposely aligns housing with economic aspirations such as levelling up and is fair and achievable for all places.”

The Conservatives highlighted that they had proposed alternatives to the current housing calculation, unlike the new administration’s letter. This included the creation of strategic planning bodies to better assess which areas had a need for more housing.

Cllr Jorgensen said: “This Lib/Lab coalition got itself elected by telling residents that they could do better than the Conservatives and by promising no development in many areas.

“On housing numbers Conservatives had fought hard over a long period and with the help of residents, who responded in their droves to our consultation in 2020, which was incidentally opposed by Labour, we achieved a 50% cut in the Government’s housing target.

“Instead, the first thing Clive Jones does on taking office is send off a letter to the Government, with much fanfare, which is almost identical to the one that his Conservative predecessor sent. “It sets out the same arguments, and in a number of places, uses the exact same words and phrases.

“When it comes to housing and development, this Lib/Lab coalition has no plans, no new ideas, and has just copied what the Conservatives had already done whilst claiming it was a new approach.