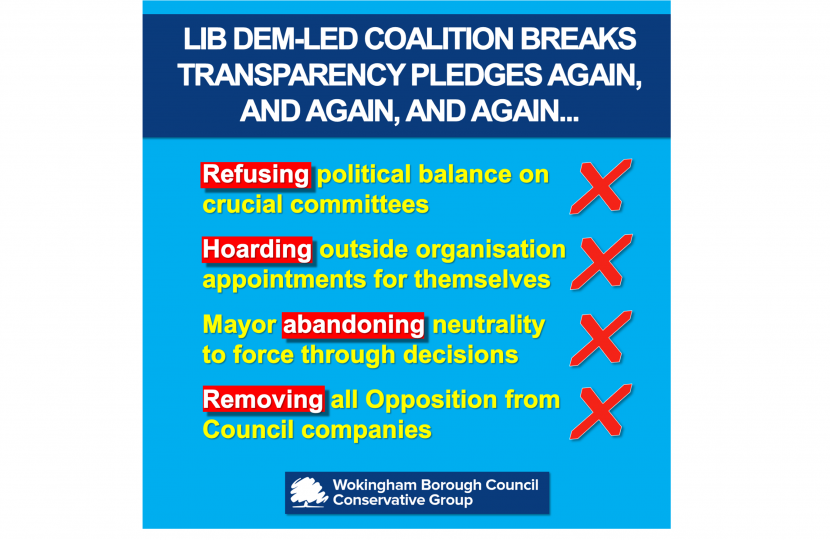 The Liberal Democrat-led coalition administration on Wokingham Borough Council has once again given up on collaboration and transparency, removing all Opposition councillors from the boards of Council-owned companies.

The Council’s Opposition Conservative Group has hit out at the new Council Leader after he removed all Opposition scrutiny of Council companies, which build new homes, provide social homes, and deliver some adult social care services. On instruction from Cllr Clive Jones, the Leader of the Council, the Council wrote to all Conservative directors of the companies demanding their resignation so that they could be completely replaced with councillors from the ruling Wokingham Borough Partnership Group.

These new directors, formerly members of the Liberal Democrat, Labour and Independent groups, all belong to the controlling WBP Group, removing any representation from the Opposition. This position stands in stark contrast to the practice under the previous Conservative administration, where a Liberal Democrat and an Independent had been appointed to the companies’ boards. Conservative councillors have accused the administration of “having something to hide” and “stifling debate”.

The move follows repeated efforts by the Lib Dem/Labour coalition during their few weeks in power to remove any form of challenge and oversight by Opposition councillors.

In May 2022, the coalition administration was criticised for refusing to add an additional member to the committee managing the Council’s rules to better reflect political balance, as well as hoarding appointments to outside organisations.

The new Borough Mayor was also accused of abandoning the long-standing practice of neutrality to ensure that her administration colleagues could force through every vote.

Cllr Pauline Jorgensen, Leader of the Opposition and the Conservative Group, said: “Less than a month in office, and yet again the Lib Dem/Labour coalition is making a mockery of its pledges to be more transparent and collaborative.

“Having said in the press that they wanted to work with Conservatives and give all councillors more opportunities to influence the delivery of improvements, these words have yet again proved to be empty promises.

“Given that the ‘Wokingham Borough Partnership Group’ runs the Council, it’s perfectly reasonable that they would want to have a majority of coalition councillors on the Council-owned company boards.

“To remove every single Conservative smacks of an administration avoiding any kind of scrutiny.

“This is really important – those companies deliver essential housing and adult social care services, and the previous directors successfully steered the organisations through the pandemic.

“With one action they have removed a group of experienced directors at a time of increased risk and uncertainty, not because of performance but on purely political grounds.

“I hope that Clive Jones will at least continue with the Conservative practice of having the company directors report back to Full Council on what they are up to.

“Otherwise, the administration will be able to run these companies with the public denied their right to know how they are performing.