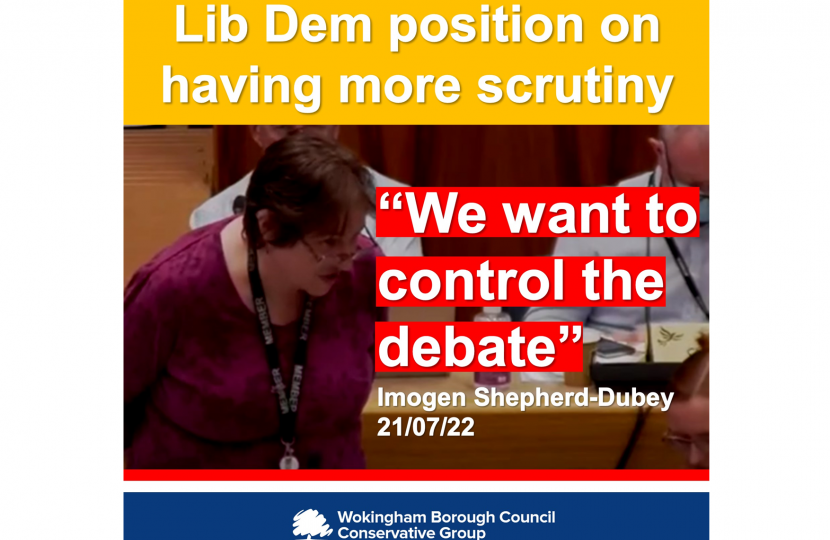 The startling statement was made by Cllr Imogen Shepherd-DuBey, coalition Executive Member for Finance, at a Full Council meeting on 21st July 2020.

The Opposition Conservative Group had hoped to introduce the ability to ask questions at Special Council Executive meetings during a discussion of the Council’s Constitution.

Instead, Cllr Shepherd-DuBey refused to allow questions or relax rules for Council meetings, saying: “We want to be able to control the debate and not have people grandstanding in meetings”.

Conservative councillors reacted with fury, arguing that the administration should not brand legitimate debate as “grandstanding” simply because the coalition does not like to be challenged.

The Opposition is now calling for the administration to allow more questions and debate at meetings, allowing the public to know what the Council is doing.

Cllr Pauline Jorgensen, Leader of the Opposition and the Conservative Group, said:

“Our jaws dropped when the administration openly admitted that they wanted to control any debate.

“This isn’t the way to behave in a democracy – it’s the duty of the Opposition to scrutinise the administration through debate.

“Over and over, the Lib Dem/Labour/Independent coalition has hidden from scrutiny and avoided transparency.

“In just a few months, the administration has refused to have a more representative balance of Opposition councillors on committees and outside organisations, and has removed every extremely qualified Opposition directors from the boards of the Council’s companies.

“Now they’re clearly saying that they don’t want to allow debate where it’s not in their interests to avoid being challenged.”