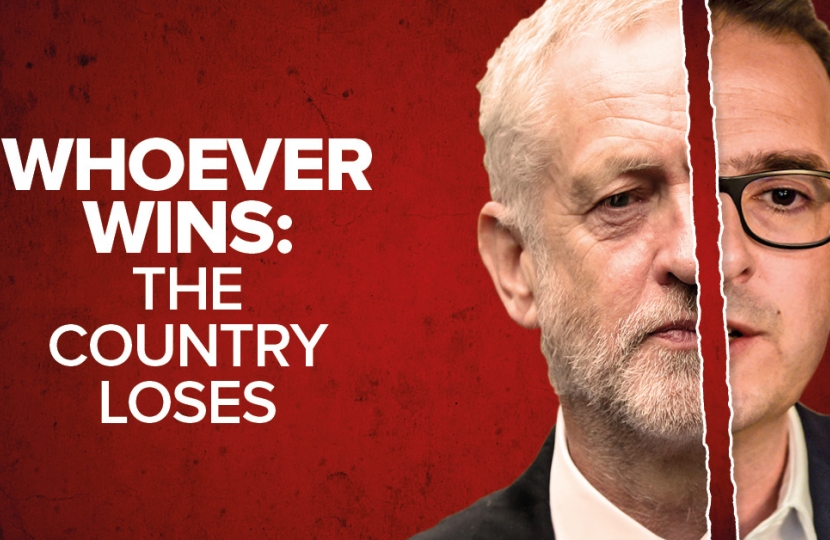 The spectacle of Jeremy Corbyn and Owen Smith traipsing round the country engaged in a bidding war for the Labour leadership has been profoundly depressing for all of us who care about the future of our country.

As a Conservative, it would be easy to become complacent at how far Labour have travelled from presenting themselves as a party of government.

But we have a duty to expose how dangerous, expensive, and downright reckless the policies that they offer now are.

Whether it’s the promise of endless irresponsible spending, the reheated hard left dogma on nationalisation, or their mutual commitment to weakening Britain’s defences, both Corbyn and Smith are living on a different planet to the millions of working men and women who want to see a government that delivers for our country.

It doesn’t matter who wins the contest- the pledges both have made are equally troubling.

Jeremy Corbyn has proposed a colossal £500 billion of new spending, higher taxes, banning ‘early evening socialisation’ after work, stopping pharmaceutical companies developing lifesaving drugs, scrapping our nuclear deterrent, ending the right for council tenants to buy their homes, cuts to defence spending, and has refused to support the principle that Britain should come to the defence of our NATO allies.

This is without even mentioning a pledge to seize control of Britain’s entire rail network- this from a man who hasn’t yet learned how to buy an advance ticket.

Not to be outdone, his challenger Owen Smith has floated £200 billion in new spending, talks with ISIS, Britain joining the Euro and the Schengen area, a second referendum to try to block Brexit, the repeal of laws that make it harder for trade unions to recklessly strike, a return to a something-for-nothing welfare system, and an unworkable graduate tax.

He has also promised £13.5 billion in new taxes, including increases in inheritance tax, corporation tax, capital gains tax, and the introduction of a new ‘wealth tax’ on people’s assets.

While all this was taking place, the Conservative Party under Theresa May formed a new government to provide strong and proven leadership. We have started work on delivering on Brexit, while at home building a Britain that works for everyone.

We have created two new government departments that will help us make a success of Brexit, announced new reforms to provide schools that work for everyone, introduced tougher new sanctions to crack down on tax evasion, and at the G20 summit took the opportunity to showcase Britain as a bold, outward-looking nation.

As this Labour leadership election draws to a close, the contrast could not be clearer.

A Conservative Party committed to delivering a country that works for everyone, not just the privileged few.

Or, the Labour Party, lost in their own self destruction. They are divided, distracted, incompetent, and as a result incapable of building a better Britain for you and your family.

It is clearer than ever that whoever wins the Labour leadership contest, it will be the British people that lose.