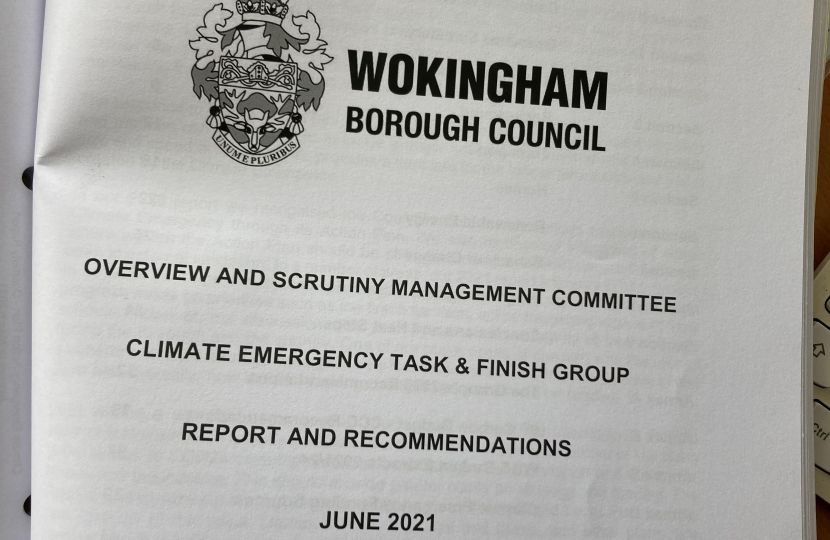 Wokingham Borough Council’s Conservative Group has announced that it will back all the recommendations of a committee report on tackling the climate emergency.

Cllr Gregor Murray, Executive Member responsible for the Council’s response to climate change, has given strong support to the final version of the report, calling it “a positive set of recommendations” to bolster the Conservative administration’s Climate Emergency Action Plan.

The report has been produced by the cross-party Climate Emergency Task & Finish Group, and finalised by the Council’s non-partisan Overview & Scrutiny Management Committee.

Chaired by Conservative Councillor Alison Swaddle, the group undertook a review of the Council’s progress on its Climate Emergency Action Plan and set out a series of proposals to accelerate actions.

The report recognises the “bold and ambitious response to the Climate Emergency” in the Council’s Action Plan.

Recommendations range from embedding climate targets across the Council’s services and infrastructure building, to ensuring that Council-owned housing companies showcase the highest standards of energy efficiency.

The Task & Finish Group report was completed and approved by the Overview & Scrutiny Management Committee on Wednesday 16th June 2021.

Cllr Murray, said: “I welcome this report and I want to thank those who have given so much of their time over to putting this together.

“I’m really pleased that the group recognised the ambition of our Climate Emergency Action Plan.

“Tackling climate change should be at the heart of everything we do at this Council, and I would be glad to support recommendations to that effect.”

We are really grateful to everyone who worked on this report, including the external witnesses, Council officers, and councillors who helped to finalise the report.