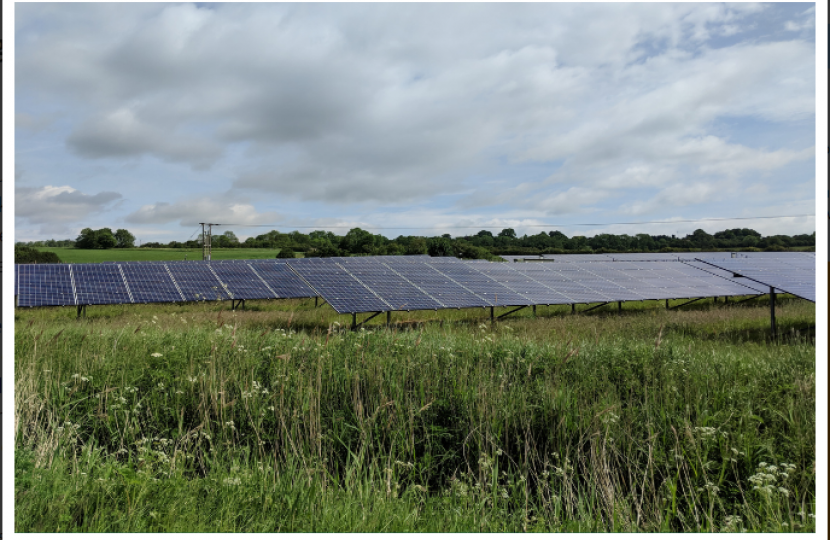 The scheme is part of the council’s vision to generate green renewable energy in the local area, helping tackle the climate emergency by reducing carbon emissions. The new solar farm would be expected to generate enough energy to power over 7,000 homes and businesses and represents a massive carbon reduction of circa 94,000 tonnes of carbon dioxide over the life of the facility

Cllr Gregor Murray, Executive Member for Climate Emergency says: "Submitting these plans is a major milestone on our journey towards a net carbon zero Wokingham."

Generating renewable solar power in the borough not only contributes towards reducing carbon emissions needed to power local homes but also demonstrates that we are committed to seeing this happen and to creating a better future for all.

There was strong support for renewable energy when we shared the proposals at the start of the year. Many residents telling us about how important tackling the climate emergency is to them and how much more they feel still needs to be done.

There were also questions about why we didn’t install solar panels on building roofs, rather than on farms like this, and that’s something we are already doing across many of the buildings we own. However that’s a drop in the ocean of the reductions we need to make which is why solar projects like this are so important to help combat climate change.

Great news that we can generate energy locally as, because of the way our National Grid works, residents and businesses receive energy from their nearest electricity sub-station which comes from the nearest generation source. Because of this, even if they don’t sign up for ‘green energy’ electricity tariffs, residents living close to the solar farm will still benefit from the energy generated here.

If approved the plans would see solar panels installed across the site, along with some small temporary cabins to house equipment and extensive landscaping plans which include planting thousands of new trees on the site. A new route for walkers, cyclists and horse riders, would also be created better connecting the existing greenway to the south of the site, to the wider area.

In the last few months we’ve continued to look at the proposals in greater detail and take into account local feedback around things such as impact on views or the risk of this changing the status of the land.

We’ve reduced the consent period to 25 years to reassure residents that this is only a temporary use, and have talked further with the tenant farmer, amending the layout and redline to help him continue with some of his businesses on site.

New landscaping plans have been designed to help screen the site and encourage local biodiversity with over 15,000 new trees and additional planting carefully chosen to help encourage wildlife. We’re also talking with the public rights of way and My Journey teams to look at how best to integrate the new footway and look at options for even more improvements in the longer term.

Plans for the Barkham Solar Farm are available to view on the Council’s website www.wokingham.gov.uk by searching for planning application number 211081.

People have until Friday May 7 to submit their comments about the proposals which are expected to be considered at Planning Committee later this year.