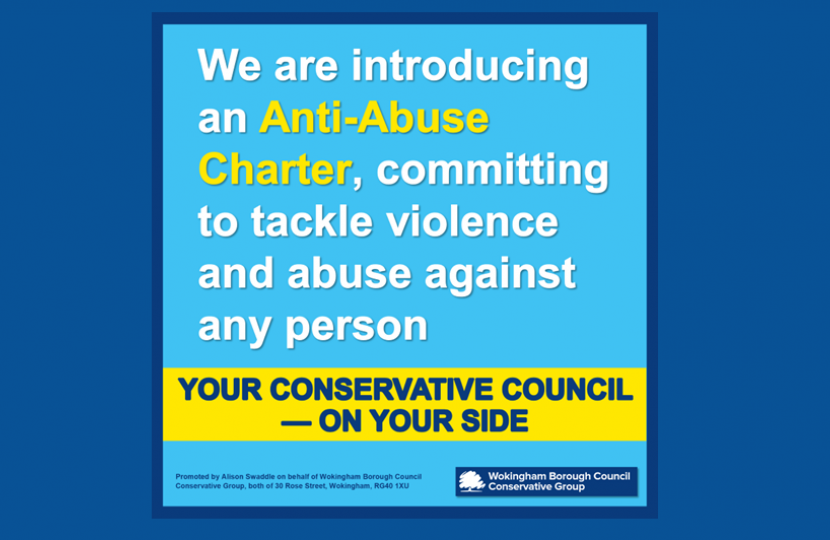 Conservative councillors on Wokingham Borough Council received backing for a proposed Charter to prevent violence and abuse in the community.

The ‘Anti-Abuse Charter’ which was presented at the Full Council meeting on 20th January 2022 by Conservative councillor Laura Blumenthal, commits to a culture across the Council of high standards in reporting abuse and supporting victims.

Cllr Blumenthal had called on Liberal Democrat, Labour and Independent councillors to join the Conservatives in backing the Charter.

Created with the guidance of Kaleidoscopic UK, a local domestic abuse charity, the Charter commits all councillors and officers to ensuring that the local authority’s culture tackles abuse and meets victims’ needs, including sensitively handling trauma.

The commitments support the Council’s ongoing work to address violence and harassment, such as the Domestic Abuse Strategy adopted in December 2021.

Wokingham Borough Council works with a range of domestic abuse stakeholders and charities to support victims and improve the authority’s response, including Kaleidoscopic UK.

A Local Domestic Abuse Partnership Board has been set up to bring together expert input from these organisations and the Government.

Residents already benefit from the Council having one of the most comprehensive Home Security Schemes to provide home security adaptations for domestic abuse victims.

“Following on from the roll-out of our Domestic Abuse Strategy, we are committed to building a safe and strong community and preventing any form of violence or abuse against anyone living in Wokingham Borough.

“The Anti-Abuse Charter formally commits officers and councillors to championing a culture of high standards by reporting domestic abuse and supporting victims throughout their recovery journey, including being informed on recognising signs of trauma and preventing victim blaming.”

"We are delighted the Council has received Kaleidoscopic's Charter with great enthusiasm and been fully supportive, taking it to Full Council to be voted on.

"It will help create vital change for all victim-survivors by including trauma-informed responses, allowing them to feel heard and fully supported.

"It was great that it passed, enabling those subjected to abuse coming forward knowing they will be taken seriously, as well as sending a message to perpetrators that any form of abuse or harassment in any setting in the Borough will not be tolerated."