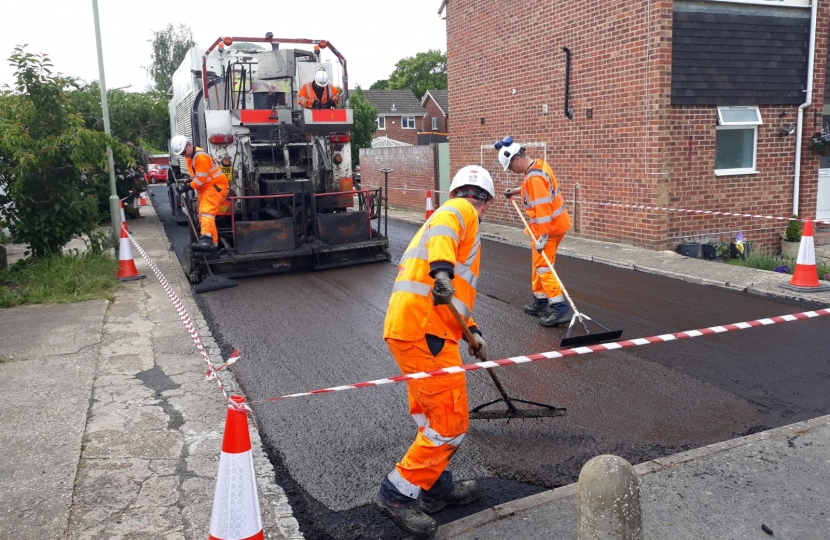 Thousands of residents have improved roads outside their homes after Wokingham Borough Council completed resurfacing on almost 100 streets across the area. Cllr Pauline Jorgensen took advantage of quieter roads in April and May to direct the Highways team to complete work on key travel routes across the borough when many were not using their cars.

“We’ve earmarked £8million for road improvements across the borough in 2020-21 and it’s fantastic many residents will already be seeing the benefits of this,” said Cllr Pauline Jorgensen, executive member for highways and transport and Conservative Councillor for Hillside ward in Earley. “I know our residents want to see investment in our roads and with more than half the completed roads so far being residential, that means many will see it outside their own front doors, as well as on key transport routes.

“I’d like to thank our contractors and partners on this project, for helping us bring it forward quickly and take advantage of quieter roads to complete these improvements with minimal disruption to residents. Thanks also to all the ward councillors who have brought their residents road concerns to my attention.”

Works have continued through the spring and into the summer, with more than £2million spent to improve surfaces in all areas of the borough. More investment in improving the borough’s roads will take place in September, with more full resurfacing schemes planned to take place through the autumn. More information on these will be made available later this summer, with residents on the roads the council will be working on informed directly by letter.

The works included 21 roads, which were carried over from our 2019-20 programme, which was delayed by wet weather. More information on the different types of roads treatment can be found on the council’s website.

Lockdown measures caused road usage in the borough to drop by 50% and roadworks by utilities companies to drop by more than 33%, providing an opportunity to complete work in potentially disruptive locations first including the A4 and the Showcase roundabout. The roads were chosen through scoring from surveys on roads across the area, meaning the council spends money on roads where work is most needed. Work often takes place in off-peak hours during the day, 9.30am to 4pm, or overnight to minimise disruption to residents.